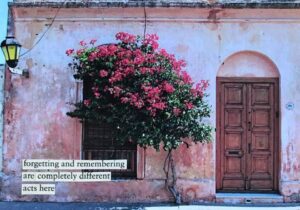 I dream I am on a public bus that takes a corner too wide because it’s going too fast. Then it misses the turn off into the suburban street it’s route is meant to include. At the end of the street is a wide sweeping right hand bend. The bus misses it totally, shooting across a grassed area, through a fence and we are hurtling over a cliff. This is just a dream, I say to myself. Wake up! Wake up! Wake up!

This is the first time I ever remember being conscious inside a catastrophic dream that it’s  just a dream. (More often than not I dream I’m on an plane that’s crashing! Or there was the serious of tornado dreams. And let’s not forget all the apocalyptic dreams that ranged from all the oxygen being sucked from the atmosphere to an atomic bomb.)

My FitBit’s data doesn’t marry with my sleep experience. I suspect the truth lies somewhere between. I’ve been waiting for my sleep to properly reset since I had an iron infusion on the 23rd December. The bruise on my arm is still there. I’ve been weaving the story I will feel myself again when the bruise finally fades. I’ll finally have a proper night’s sleep when you can’t tell I had to have a needle stuck in a vein to top me up with ferritin.

You know how kids whine: are we there yet?

The calendar year feels a little like that. Today, Tuesday, finally brings life back to normal.

So I let go of the dream and go to the pool. I love the feeling of the water over my naked body. I’m committed to doing this for 365 days.

I wonder what it will be like to do this in the middle of winter when it will be more like cold water immersion than a pleasant swim before the heat of the day arrives.

Immersion in cold water is one of the things on the list for regulating the nervous system (there’s part of my brain that says wtf though about this — and the cold-pain matrix has kept me from really exploring it properly).

Yoga makes me feel unco, old, sweaty and amplifies my feeling that I am not well anchored in reality. The opposite to what I had hoped it would do for me. It doesn’t inspire me to want to do it tomorrow.

Despite how I feel about yoga, my morning stillness practice is forming itself up.

I also pull an oracle card from my new deck (thanks Cath!) and see what the photo of the day is in Patti’s Smith’s A Book of Days.

I don’t feel emptied out. I feel cracked. Fractured. As though me, as a container, can’t hold energy. It’s a deeper understanding, from within the shit storm, what the emergency triage part of self replenishment is managing and healing.

You can’t fill a container that’s lost its structural integrity. It’s a minimum requirement for functionality.

In 2021 I couldn’t even begin the process of filling up until my cup was whole and well formed again.

While I don’t want to insert brokenness into the narrative of self replenishment, an un-regulated nervous system has lost (or is rapidly losing) its integrity to hold energy. It is why everything else becomes impossible.

Combined with an ongoing sense of deflation.

Space shrinking, inside me and around me.

The drive to the cafe gifts me serendipity. A moment of synchronicity. Magick at its best. A moment I shouldn’t have even been able clock across four lanes of traffic moving 60km.

I fill all the way up in the space of a few seconds. It doesn’t last though, this expanded space. But it lingers. It reminds me that possibility never disappears.

Magick isn’t the only powerful refilling agent. So is hope.

I don’t stay long in the cafe. The nausea bests me and I go home and try to sleep. I hold out for acupuncture in the morning. And of course … I hold out for another dose of magick as I drift on the edge of sleep.

I hold out for there being an end to where my nervous system has landed this side of solstice.

No comments to show.